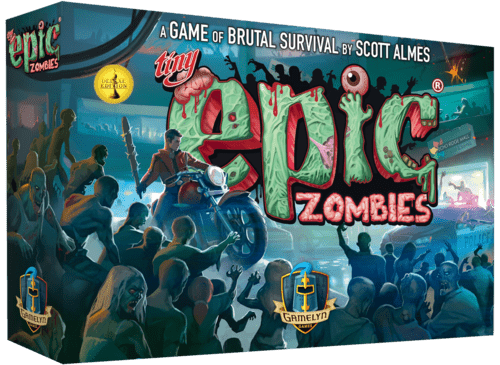 If you ever wanted a game where your pink meeple, armed with a crowbar and an assault rifle, could ride a motorcycle through the walls of a shopping mall killing zombies… then your name is probably Scott Almes, designer of Tiny Epic Zombies by Gamelyn Games. Tiny Epic Zombies is a 1-5 player game that takes about 30-45 minutes, mostly depending on how proficient you are with the setup. The premise is simple – you are survivors of the zombie apocalypse in a shopping mall, trying to achieve specific objectives before being overrun.

I’m a long-time fan of the Tiny Epic series of games – each of them comes in a small box with great components and each has its own distinct style of gameplay, from worker placement to 4X to head-to-head combat. The complexity of the games varies quite a bit, and I’d probably put Tiny Epic Zombies somewhere in the middle – it will take most gamers a few plays to get the hang of it.

The game has five different play modes. In addition to a solo version, there are two basic variables – cooperative or competitive play for the humans, and whether or not the zombies are controlled by a player. The main difference between competitive and co-op is whether each player is trying to achieve objectives independently or whether the players are working together to complete them. Adding a zombie player makes the game significantly more difficult for the humans – not only are the zombies attacking more strategically, but they can deploy special powers when one of the humans is “overrun”, meaning a zombie is placed into the same room of the mall with a human.

Human players are managing three resources – individual health and ammunition, and a barricade at the center of the mall that must stand to protect non-player survivors – if it falls and all the survivors die, the zombies win.

Each turn consists of a human turn and a zombie turn. On the human turn, the player must move his or her meeple three times. Each time the player moves, she can kill one zombie, and can also potentially interact with items or rooms in the various stores of the mall. One constraint, however, is that most interactions require that the three rooms of the store be completely clear of zombies, which can be a tall order.

Once the human has finished his turn, he flips over a “Search” card indicating what he found on his travels. This card is placed in the same store as the meeple, and has a color code indicating which stores the zombies are invading. In some cases, these cards are useful equipment; in others, they are nasty surprises like explosions or extra zombies. The zombie player now deals the human a new card from her hand, and then places zombies based on the color coding of the search card, at a rate of one zombie per room of the store. If zombies reach the center courtyard, they damage the barricade. Play then moves to the next player. Once the zombie player has no more Search cards, the humans each get one more turn and then the game ends in victory for the zombie player – unless the humans can complete their objectives.

​There’s a certain Pandemic-like vibe to the game, with players needing to decide whether to fight zombies to protect the barricades (and each other) or to pursue objectives such as guiding army units into the mall or discovering the cause of the zombie outbreak. The time pressure of the supply deck is also a very real constraint on the game, both forcing hard choices on the players and ensuring that the game does not drag on forever.

My main critique of Tiny Epic Zombies is that the flow of the game takes a little while to master. Inserting the zombie turn after each human turn can be hard to remember even with a zombie player, let alone without. With practice, though, I can see this game becoming a lot of fun. Replayability is great because of the changing layout possibilities of the mall and the different objectives available. If you like fighting zombies, I’d give this game a go.