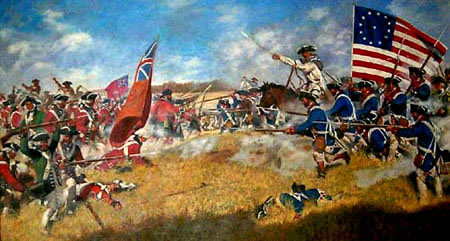 Developing a setting based on a historical, large scale war requires that the gamemaster consider how the players will participate in major battles. Fortunately, Savage Worlds provides a great starter framework with the Mass Battle rules. However, in the world of Legion of Liberty, superhumans are more powerful on a battlefield than, say, even a Veteran wizard in a battle between 5000 orcs and 3000 human knights. The question was then how to capture the importance of the presence of superhumans on the battlefield within the framework of the Mass Battle rules.

Late 18th century land warfare included a lot of formation fighting, mainly because of the horrible inaccuracy of muskets. While rifles were available at this point in history, they were extremely slow to load. A skilled musketeer could fire 4-5 rounds per minute; a skilled rifleman was lucky to fire once every two minutes. As a result, massed formations of infantry blasting musket volleys were the order of the day. An infantry unit could also form a square to defend against a cavalry attack, or spread out to minimize the effect of artillery fire (although the two in combination could be lethal, as the defense against one made the infantry terribly vulnerable to the other).

Where rifles were beginning to see use was in skirmishing. A skirmish force would spread out in pairs ahead of the main infantry formation. Their role was primarily to eliminate enemy skirmishers, followed by direct attacks on enemy leadership. Killing officers and sergeants could eliminate unit discipline and cohesion, and without the discipline of the formation, infantry generally broke and ran when attacked in force.

Superhumans, then, could act somewhat like skirmishers. We envisioned superhumans working much the same way – their primary responsibility would be to eliminate enemy superhumans, and then to strike at the main body of the enemy in whatever way best suited their powers. With this structure in place, a super-versus-super battle could be occurring in the midst of a larger scale battle. The setting rule we created has this individual combat affecting the morale of each side – losing a superhuman is a major blow, and if one side is more successful in defeating the other’s superhumans, the conventional forces might break and run.
​
Dramatically, this works very well – the characters both have a major influence on the battle and get to duke it out with British superhumans in standard Savage Worlds combat. The result is a “best of both worlds” flavor that fits the setting and makes for fast, fun, and furious gaming.