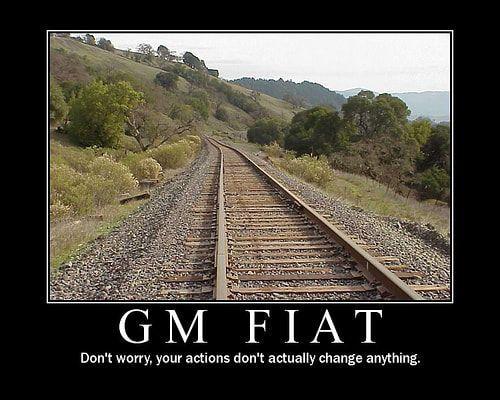 Plot point campaigns are one of Savage Worlds’ key innovation. The idea is to provide a campaign framework that doesn’t mandate railroading the players while simultaneously providing enough story to keep the characters interested.

Plot Point Campaigns, on the other hand, have some form of beginning, middle and end. Often, they require just as much sequential action as a conventional, railroad style campaign; they just have more space in between episodes, allowing for other stuff to happen. At some point, however, in following a Plot Point campaign, a certain amount of GM fiat is going to come into play. You’ll need to get the players somewhere, avoid them killing a critical NPC, or otherwise manage the consequences of their actions to avoid derailing the campaign.

Whether or not that’s a problem really depends on your group. Some groups want the GM to point them in the direction of the cool stuff, and will grab and run with whatever narrative hooks the GM tosses out. Others resent any infringement on their player autonomy, and will cheerfully derail the plot at the slightest opportunity. (See Darths and Droids for an excellent example.) With those groups, your Plot Point campaign is probably going to go bust at some point, and you’re just going to have to roll with that.

The beauty of Savage Worlds is that it works with either play style. Want total narrative freedom? The mechanics are simple enough that the GM can wing it. Want a story? Not only can you run a more directed campaign, but the flat power curve means that you can stick as much stuff in between planned encounters as you want without the players running into a completely “imbalanced” fight – in either direction. The two flavors of Plot Point campaign are well suited to the two extremes of group preference for GM fiat, and it’s worth understanding which one is available in any setting of interest and matching that to your group.