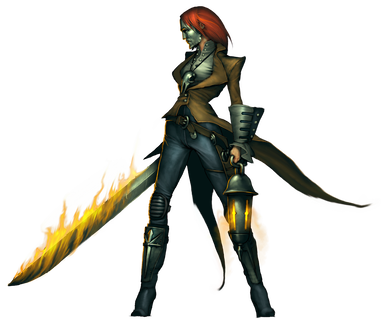 The heroes have survived their encounter with Rasputina, Avatar of the Tyrant December, but not without a change; Providence is now a member of the December Cult. Rasputina informed them that a woman named Kirai is key to Plague’s effort to ascend to godhood, and directed the heroes to seek her out in Malifaux City. The heroes decided to retrace their path to Hollow Point Pumping Station to confer with their new patron, Victor Ramos, but were intercepted enroute by Sonia Criid and her Guild Witch Hunters, and also by Neverborn Nephilim possibly seeking out Zai.

The heroes immediately saw that the two hostile forces would likely keep each other busy, and made a run for it into the badlands. Each commander, however, dispatches a small force to pursue them – a team of Witchling Stalkers led by a Handler for the Guild, and, from the Neverborn, a group of Terror Tots, hideous demonic imps, led by a larger winged demonic Nephilim.

Seeing the pursuit, Bernard fires up his rocket pack. “Come with me if you want to live,” he yells as he flies into the air, seizing Anna Mae by one arm and hauling her into the air as she screams in surprise. Providence uses her new abilities to cast an ice pillar in the path of both Neverborn and Guild, which results in a small melee between Witchlings and Terror Tots. The result is a chain reaction explosion with splashes of Nephilim black blood corroding Witchlings, who then burst into flame.

Zai summons a poison gamin atop the pillar, ordering it to blast poison into the ice in the hopes of shattering it as a weapon. Bal attempts to shatter it with his rifle, but the pillar only cracks, and his pause to take a careful shot puts him at the back of the chase. The Nephilim soars over the pillar, but the poison gamin manages to leap into the air onto its back. Meanwhile, Anna Mae fires wildly, but only manages to graze the Nephilim.

Bal fires at the pillar again but his trusty rifle Tawny jams. The poison gamin claws ineffectually at the Nephilim, who hurls it to the ground just as Zai summons a metal gamin. Distracted by the new gamin, the Nephilim slows for a moment, and the Witchling Handler shoots it out of the sky with her crossbow. She proceeds to finish off the remaining Terror Tots and then fire at Bal, injuring him badly. When the rest of the heroes turn back to fight her, however, she takes the hint and runs for it.

With their original plan to return to Hollow Point compromised, the heroes decide to set out overland for Ridley.  Much of their journey is uneventful until they reach a point about a day from the town. They hear loud crashing through the brush. “That doesn’t sound like pig,” remarks Bernard. “You might want to ready your weapons.” Providence and Anna Mae take cover behind rocks on either side of the path, while Bal takes a sniper’s perch in a tree. Zai stands on top of Anna Mae’s rock, and Bernard stays put, squarely in the path of whatever is approaching.

Through the brush, two enormous wooden puppets appear, flanked by eight smaller marionettes. Bernard rolls up his sleeve on his punching hand and steps forward. “All right, step forward one at a time. None of you have anything good anyway, so I’m not really expecting much, but you could at least put up a bit of a fight before I beat you.” One of the puppets seems taken aback by the taunt, but both charge. Providence shoots one as it approaches, but the other wraps its arms around Bernard and attempts to crush him. The one Providence hit shrugs off the attack and punches Bernard.

From his sniper perch, Bal fires the repaired Tawny and shatters the head of one of the smaller puppets. The survivors immediately charge forward, claws outstretched. While Anna Mae cowers in shock and hides behind her rock, Zai gestures broadly and a fire gamin appears behind the smaller puppets; the gamin promptly claws at one puppet ineffectually and blasts another to pieces with fire. Zai summons a second fire gamin as well as an illusory gamin to distract the puppets. Providence pops up and blasts the damaged large puppet (which looks like a noble lady) with her shotgun, then drops back into cover, and Bal coolly picks off another of the smaller puppets from the tree.

Emboldened by her friends’ successes, Anna Mae closes on the large puppet dressed as a king that is holding Bernard. She takes careful aim and fires her shotgun – and it explodes in her hands, scorching and stunning her! Taking advantage of the distraction, Bernard breaks free of the king puppet. Ignoring the fire gamin, the small puppets continue to close in. Two of them begin to pummel Bernard, injuring him, one attacks Anna Mae, and two attack Zai. The lady puppet also punches Bernard, lifting him into the air by the belly and slamming him into the ground face down, unconscious and bleeding. The king puppet then leaps over the prone Bernard and punches Zai, knocking her momentarily off balance.

The smaller puppets swarm around the heroes. One leaps atop Providence’s rock and claws at her, two strike out at Anna Mae, one clawing across her back, and two strike at Zai, one sinking claws deep into her shoulder. Anna Mae reaches down and tries to unstraps Bernard’s rocket pack, intending to send it flying into the lady puppet, but she cannot puzzle out Bernard’s bizarre Gremlin control system. Providence smashes the puppet off her rock with a frying pan – its severed head flies off yelling “That’s the way to do it!” She then fires her rifle, which jams.

Bal, seeing Anna Mae in distress, tosses her his shotgun. Anna Mae catches it out of the air and blasts one of the attacking puppets into splinters. Bal then fires his rifle and the lady puppet collapses into pieces. Zai calls one of her fire gamin to her and detonates it, igniting two of the small puppets, then summons a whiskey gamin atop the king puppet. Anna Mae snatches up the sharp barrel of her broken gun and stabs a small puppet, sending it spinning to the ground. Bal leaps from the tree and runs over to patch up Bernard. “Gonna be OK, boss,” he mutters. The last surviving small puppet runs towards Zai but her other fire gamin claws it to pieces. Zai summons a new fire gamin on top of the king puppet as she runs for it, then detonates both it and the whiskey gamin. With a blue fireball, the last puppet falls.

The wounded party limp their way into Ridley, where they follow a trail of blue graffiti to locate an Arcanist safe house. There they find their old companion Cesar, a.k.a. Vito Sessa, juggling a small ball of fire. “Hey, how’s it goin’?” he asks.

“Oh, is that why you were there? Oh, is that where you were? Where we might be?” asks Providence, both excited and incoherent.

“Yeah, turns out I can do magic. Who knew?” answers Cesar.

“I knew I felt good about letting you go,” says Bal.

“So, you guys are Arcanists now? That’s pretty cool.”

“Yeah,” answers Bal, “We kinda ran short on options, but we’re glad to help out!”

“Somebody sure messed up your Gremlin there.”

“I’m in the works for a rematch,” says Bernard. “Until then the show’s suspended.”

“I’m not an arcanist. I’m a Child of December,” says Providence.

Unnerved, Cesar replies, “Yeah, well, I guess I’m gonna say keep your dietary habits to yourself, and we’re all good here. I hear from the boss that you’re all on some kind of mission. What do you need?”

“We need to get to Malifaux City,” says Bal.

“OK, I think we can hook you up. You all mind being packed in crates? We can ship you into the city that way and deliver you right to the Star Theater. You know Colette’s one of us, right?”

“I did hear about her inclinations,” answers Bal.

The smuggling plan is successful and the heroes arrive in crates at the Star. Colette is waiting as their crates are opened. “Fancy meeting you again,” she drawls.

Zai answers, “This is not how I intended to make my triumphant return to the stage.”

Between Bernard and Providence, the heroes quickly fill Colette in on all the details of their adventures.

“Well,” says Colette when they finally wind down, “I understand from dear Victor that you are now amongst the inner circle, as it were.”

“I’m not with Victor, but I am with Rasputina,” puts in Providence.

Colette gives a delicate shudder. “I’ve never met her, but I understand she is rather… creepy.”

“I didn’t see it,” Providence shrugs.

“Well, I know you are capable folk, so I’m just as happy to have you on the proper side.”

“Ya know, considering our track record, it’s almost like we were members all along, am I right?”

“Well, I can’t say that blowing up that grimoire was the best thing you’ve ever done. Nevertheless, I understand you have a mission to find this Kirai Ankoku. I’ll put the word out on the streets and see if we can find here. In the meantime, we can hide you in the theater. The Guild is certainly still interested in arresting you, and I’m afraid you’ll need to be subtle about moving through the city. Best get used to the sewers.”

Later, Bal takes Colette aside and asks her about Nytemare. “I’m not aware of a cult of Nytemare,” she says. “But there have been strange manifestations in and around the city that I believe might be related. There are also legends that say that Nytemare is the master of puppets.”

“We been attacked by puppets a couple times.”

“I have heard that Nytemare is trapped between the worlds and can only influence them indirectly, through his avatar, a small boy who seems to be dreaming his way into Malifaux, and manifesting horrifying nightmare creatures. I fought him recently, and lost one of my showgirls before I could escape. It was quite distressing.”

The heroes settle back into the Star and await news of Kirai, wondering if they can find her before Plague does.
​
Image property of Wyrd Games.