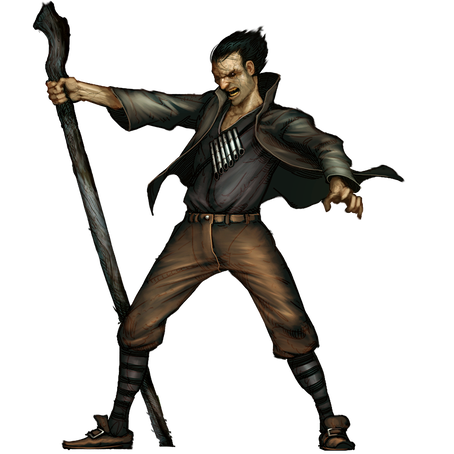 The heroes have learned that Hamelin, the avatar of the dark Tyrant Plague, needs only the spirit ring of Kirai Ankoku to activate the machine that will raise him to godhood. While Zai carries the wounded Providence to the Governor-General’s mansion for treatment, Bal, Bernard and Anna Mae pursue Hamelin to Kirai’s tower in the Quarantine Zone.

As Anna Mae dashes through the streets of Malifaux City, she glances down an alleyway and comes to a screeching halt. Standing in the alley is a man who has apparently died by hanging and whose skin is covered in yellow glowing runes. Anna Mae yells, “Stop,” and Bal and Bernard come back to look down the alley as well.

“Whatcha lookin’ at?” asks Bernard. Anna Mae realizes that only she can see the man; she also remembers that she has seen him before – hanging from the tree in front of the Governor-General’s mansion.

“We don’t really got time to stare into the void,” says Bernard. “How about we do that later?” Bal and Bernard take off, and Anna Mae follows for a moment and then doubles back. She calls a greeting to the hanged man and he walks over to her, removes the noose from his neck, and hands it to her, then vanishes.

Looking back, Bal sees Anna Mae holding the noose. “Looks like she lost her marbles but got a rope,” he mutters, and keeps running.

As Zai approaches the Governor-General’s mansion, the guards accost her. “Who are you?” they demand. “Tell Lucius to fix this,” she says, sets Providence down, and whirls to run for Kirai’s tower.
As Bal, Bernard, and Anna Mae approach the tower, they hear the sounds of a great battle. Turning the corner, they find a massive melee. On one side, Hamelin leads a horde of rats, plague zombies, and plague gamin, with a few plague golems in the front line. On the other, a few humans led by Kirai head a massive force of terrifying spirit creatures leavened with undead zombies. Kirai screams continuously, her ring glowing with a blinding green light. All three heroes freeze for a moment, uncertain what to do.
Bernard looks up and sees winged plague gamin fighting in the air against flying ghosts. Lighting off his jetpack, he soars into the air to take them down; unfortunately, one of the gamin latches on to his arm, throwing off the controls and sending Bernard crashing into a wall. Anna Mae begins lecturing the plague zombies about the evils of violence; with the magical energy of Malifaux powering her academic skill, she causes several to hesitate, giving Kirai’s forces a moment of breathing room. Overall, however, the forces of Plague are clearly winning the day.

Back in the city, Zai frantically looks for a way to get to the tower faster. She commandeers a Guild construct, but with no idea of how to drive it, she only manages to travel slightly faster than she could on foot.

In the battle, Kirai’s forces are badly battered. Bernard returns to the sky, only to be struck again by the flying gamin and injured. Bal cooly takes shots at the approaching horde, slowing them, but Anna Mae is cut off and badly hurt by a force of rats. The heroes hear Kirai’s scream abruptly stop, and then the sound of sobbing. Kirai is collapsed on the ground – all of the ghosts have vanished, and one of Hamelin’s orphans is running away with his hand glowing green from the force of Kirai’s ring. Bal aims carefully and takes a shot at the orphan, killing it. The ring flies from its open hand and rolls along the cobblestones; then a rat seizes it in its jaws and dives into the sewers.

A loud clanking announces Zai’s arrival on her “borrowed” construct. The heroes climb aboard and head back towards the entrance to the Necropolis, expecting that Hamelin will head for his machine. As they head back, a large patrol of Guild Guards appears, led by the healed Providence. Providence climbs aboard and heals the wounded Bernard and Anna Mae, asking “What happened? What happened?”

From the back of the patrol, Captain Dashel appears. “You have the ring?” he asks.

“No, follow us!” says Bal, gunning the construct for a bit of extra speed.

“Y’all aren’t so good at acquiring artifacts, are you?” says Dashel as he gestures for the guards to follow.

“You were sitting on your ass while we were out there fighting!” yells Bernard as the construct pulls away.

Looking at her comrades, Providence notices Anna Mae’s rope. “Do you know that rope is infused with the Grave Spirit?” she asks. Anna Mae gasps, then explains that she learned from Lucius that the Grave Spirit was brought into this world by Titania, Queen of Malifaux, in the ancient battle against the Tyrants. The Grave Spirit was brought to destroy them, but also corrupted the Malifaux natives and led to the first necromancers. Zai is shocked – this is not the Malifaux she remembers – does she want to spend her immortal existence here?

The heroes abandon their construct at the sewer entrance and run through the Necropolis, retracing their earlier path. As they run, they see ghostly forms moving through the corridors, similar to those they saw fighting with Kirai. Anna Mae begins shouting directions at the ghosts, hoping they would follow.

At the machine chamber, the strange engine is glowing with blue-green energy. Parts of it are moving, some in an expected mechanical way and some with eerie biological flows. At the control panel is Hamelin, who cackles, “You’re too late – soon I will be a god!”

“You can try!” laughs Hamelin.

Zai enters the room in a burst of illusory fireworks, scattering colorful butterflies rather than sparks and distracting Hamelin from the others’ actions. She throws a knife at him, which sticks in his body and then flows down it, clattering to the floor. Anna Mae freezes in panic. Providence’s eyes glaze over as the latent rat disease sinks into her, and she detonates a freezing blast right on the heroes, slowing them down.

“Snap out of it, soldier!” yells Bal, slapping Providence.

Bernard runs towards Hamelin. “Hey, Hamelin! I got a taste of your rats and I have to say I think you’d taste better! Guess what’s going to happen to your fingers?” Hamelin just laughs, rips one of his own fingers off, and tosses it to the Gremlin; from the stump, vermin flow out and regenerate the finger in seconds. For a moment, Hamelin’s will tries to override Bernard’s, but his Gremlin stubbornness carries him through. A swarm of rats erupts between Bernard and Hamelin and forms into a human shape, roaring with rage.

Providence, shocked by Bal’s slap, breaks free of Hamelin’s control and collapses. Bernard launches into the air, the flames from his jetpack washing over the rat-man and setting it on fire. Adding to the fiery chaos, Zai summons a fire gamin. Bal charges Hamelin and batters at him with his relic hammer, but Hamelin’s vermin form simply oozes around the blows as the avatar laughs in Bal’s face.

Providence stands back up. “Hey, what… you took over my mind! I hate it when people do that!”

Bernard, flying above, mocks the enemy. “I know you want in, Hamelin!” Anna Mae holds up the noose, hoping for some reaction from Hamelin. She believes it is important, but isn’t sure whether she should be putting it on herself or trying to lasso Hamelin. Unfortunately, Hamelin doesn’t react, his focus on his furious melee with Bal. Zai summons another gamin and commands both to sabotage the machine to the best of their ability.

Bernard zooms through the air to punch the machine with full force, badly denting it. As he does, the rat-man snags his leg and sends him crashing into a support pillar, badly injuring him. Providence runs forward, firing a bolt of ice at Hamelin, who simply absorbs it. As he does, he sees Anna Mae’s noose and seems to pale in fear. He sends a blast of plague energy at Bernard and the gamin, and knocks Bernard out of the sky. Bernard slumps to the ground unconscious, his jetpack sputtering as he releases the controls. “You won’t stop me now!” laughs Hamelin, pulling a lever on the machine. The intensity of the glow from the machine increases tenfold, and the machine parts rapidly speed up.

While Hamelin is distracted, Bal finally gets in a good hit with the relic hammer, staggering the vermin avatar. Providence moves up to heal Bernard, while Zai’s gamin tear at the machine innards and Zai throws another knife at Hamelin, which passes through his body without effect.

Suddenly, Kirai runs into the room, brandishing an enormous pair of shears. “Get out of my way,” she hisses.

In Bal’s head, he hears Zoraida’s voice again. <<FINISH HIM>> Hamelin looks afraid as Kirai brandishes the shears at the rat-man, and the beast dissolves into a puddle of steaming slime. Anna Mae looks at the noose in her hand, and suddenly realizes it is meant for Hamelin. Bernard lunges at the machine at claws at Kirai’s ring. In a blast of blue-green energy, he is hurled backwards – but in the same glow, he suddenly grows to a height of six feet, his clothes tearing away as his body expands.

“The god-making machine worked for me!” crows Bernard, still shaking from the energy shock.

Providence fires another ice bolt, and one of Hamelin’s arms is blasted off, freezing and shattering as it hits the ground. Kirai steps forward. “Give me my ring back,” she snarls, and stabs Hamelin through the chest with her shears.

There is a moment of total silence. The blue-green energy from the machine pours into Hamelin, and for a moment he begins to grow – then he explodes in a shower of vermin.

And then the heroes are somewhere else. They stand in the Bayou, and from the sky comes a sound of screaming. A cage formed of living flame plummets from the heavens and crashes in the swamp, exploding and forming a massive crater. In Bal’s mind, Zoraida speaks. <<CHERUFE IS FREE>> she laments.

There is a moment of darkness, and visions fill the heroes’ minds. A gremlin and his pig expanding to three times their normal size. Zoraida transformed into a beautiful woman floating above the swamp. Sonia Criid wreathed in flame, striding through the city, twelve feet tall. Ramos clad in armor like a titan bursting forth from Hollow Point. And then… another moment of darkness.

In the machine chamber, Kirai takes the ring from the half-melted machine and puts it back on her finger. Ghosts and spirits flow into the room and disappear into her shears.

Bal hears Zoraida’s voice once more. <<THE AVATARS HAVE WOKEN>>


And that brings Savage Malifaux to a close for now. Look here for new adventures as playtests begin on new products from Happy Monster Press!