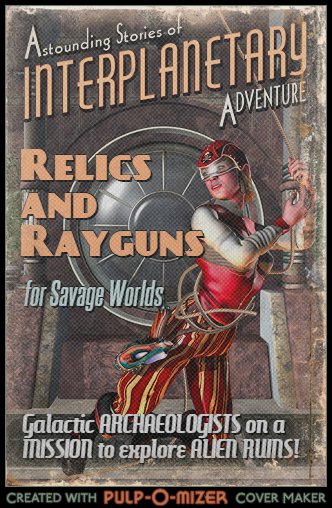 Six sentients receive a message from a mysterious sender – “You have won a trip to RARCon on Ocheebeh! RARCon is the premiere Relics and Rayguns convention in the Ocheebeh system, with an expected attendance of over 25,000! Eight real node prospector teams will be in attendance! Your wormhole courier ticket is enclosed!” Since wormhole travel is fantastically rare, and most sentients never leave their home solar systems, the five prospective prospectors are shocked. Where could this mysterious message come from? None of them entered a contest of any sort. One of the recipients, a Contemplative/FounderNet whose whistling name translates roughly to “Hooey”, hacks into the message and determines it originated with something called “Eechoba OE”. Without further clues, but with a once in a lifetime opportunity before them, the five board ships orbiting their respective homeworlds and head for Ocheebeh.

The convention itself is held on the Ocheebeh proper, the origin world for the species. Ocheebehlings are squat, radially symmetrical hexapods with three tentacles, each with an independent eye, brain, mouth, and lip-fingers. Ocheebeh has a high gravity (1.95 times that of Earth), which is uncomfortable for many species. Two of the five travelers are already equipped with technological assistance for such worlds, but Hooey opts to leverage his network and ask for other FounderNet members to have an exosuit ready for him on his arrival. Another traveler, Shuhb, a Tardigrate/XXXXX, pings his network for some local biological intoxicants to make the higher gravity more bearable. A third, the XXXXX/Junker Binx, discovers to her extreme discomfort and regret that she suffers from Wormhole Flu, a sense of nausea and fatigue caused by transiting a wormhole.

The convention itself is spread over several hotels in the city of Abeehleh, the fourth-largest city on the planet. The heroes work the room a bit, standing out as non-Ocheebehlings. Almost all the few hundred “aliens” in attendance are node prospecting crews there to talk on panels or present findings. Around noon on the first day of the conference, each of them receives a message: “Please report to Suite 372 to receive the remainder of your winnings.” As they approach the elevators, the group sees each other for the first time.

Binx, the Bastoid/Junker, is a feline humanoid; Max and Miaulong are both concealed inside exosuits. Hooey, the Contemplative/FounderNet, vaguely resembles an Earth octopus, while Shubb appears to be a two-meter-tall tardigrade – a Tardigrate/Arthropendium. The last, Lefty, is a Zemmite/Freeflyer who bears a resemblance to an Ocheebehling, but with a single head rather than three and three non-head tentacles. Lefty says, “Hey, are you guys headed to Suite 372? I got a message about a prize! The name’s Lefty.”

The group introduces themselves, then pauses as they approach the door to Suite 372. After a moment, Hooey simply opens the door and walks in. “Welcome, welcome,” says an Ocheebehling inside. “I am Mr. Eechoba. Please, be seated.” He gestures with one tentacle to an array of chairs, each one clearly tailored for one member of the group. “I am happy to be here to announce that you have each won a 1/6 share of a node prospecting ship.”

For a moment, the six are stunned into silence. Then Shuhb asks, “What’s the catch?”

“As it happens, there are a couple of conditions. First, you must rename the ship. The terminals are set and awaiting your input, and as soon as you enter the name, the ship will be registered to you as a group. Second, your first journey must be to a specific exit node.”

“And what’s at that node?” asks Shuhb.

“Something dangerous?” puts in Binx.

“Well, it’s a blind jump. Not mapped. And node prospecting is a dangerous profession. But I can assure you I wish you all nothing ill.”

While suspicious, the group agrees to sign on. They spend the next few days attending the convention and assembling their gear before boarding Mr. Eechoba’s shuttle for their new ship. The ship itself is a Seeker-class prospector concealed in the rings of Ocheebeh’s single gas giant. Like all prospecting ships, the Seekers are mostly engine, power plant, and wormhole generator rods. Around a quarter of the overall ship is detachable and can fly independently, allowing the prospectors to enter atmospheres without damaging the delicate wormhole transit equipment. The detachable section has space for six crew and eighteen cubic meters of cargo, and comes with a simple omniprinter rig for food and air recycling.

“What shall we call her?” asks Lefty. The astrogation terminal has a prompt open to “Enter ship name”.

The group debates for a while, then settles on a name befitting their mission: the Blind Jump. Taking their stations, the prospectors prepare to jump. After a brief miscue from Binx at the engineering station, the group makes the transit and begins scanning their destination.

The system they have entered is a red giant with three gas giants in orbit. Careful scanning with electromagnetic and gravitic sensors shows an artificial construct orbiting the star. The Blind Jump closes in on the structure, identifying it as a toroidal space installation bearing the hallmarks of the Founders. On approach, they find three large airlocks around the perimeter of the torus, with one of them apparently having been forced open. A quick spacewalk to the airlock and some fiddling by Binx with the inner door, and the group enters the installation…

META COMMENT: I had a recording equipment fail for this session, so the detail level is not what I would prefer. Look for more dialogue in the next post.