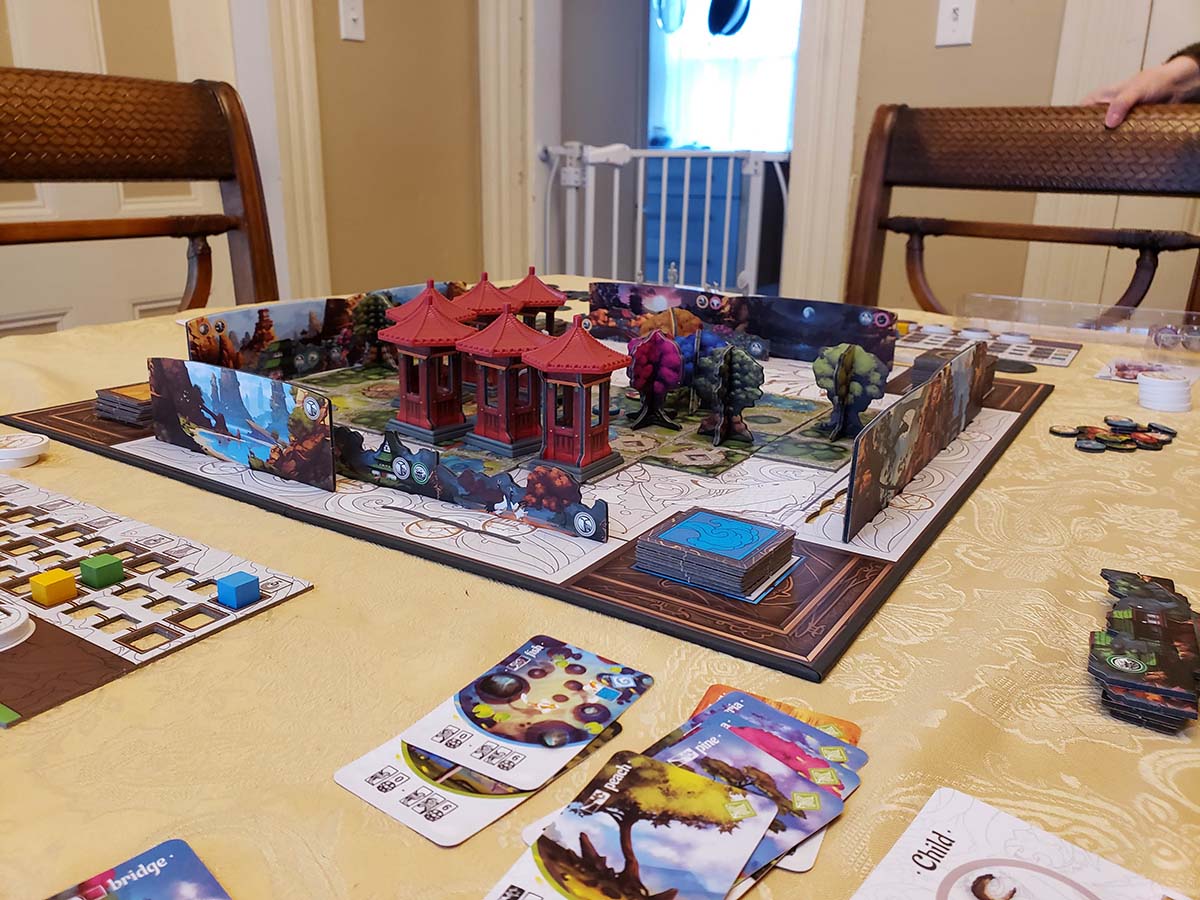 Tang Garden, from Thundergryph Games, is a 1-4 player game of garden design set in the Tang Dynasty of China. When I saw the game on Kickstarter, I immediately fell in love with the theme. I have players in my regular board game group who don’t really like head-to-head battle games, but enjoy more aesthetic games like Tokaido. And, for those of you in lockdown or quarantine, it’s playable on Tabletopia.

The objective of Tang Garden is to have the most coins at the end of the game. Coins are earned in several different ways, both during and after the game. Each player’s turn consists of one of two basic actions, plus a few optional actions. The first basic action is placing a garden tile. Similar to other tile-laying games like Carcassonne, the tile must be placed to match up one of the four types of terrain – rock, water, greenery, or garden path. Matching up one garden path gets you a coin, while matching up one of the other three types advances the corresponding track on your player board. Completely enclosing a rock, water, or greenery space gets you another advance of that type, and matching up two garden paths gets you either two coins or a “wild card” advance on the track of your choice. Some tiles also have walls, which can match and enclose any terrain but don’t advance any track by themselves.

Scattered around the board are landscape counters. If you place a garden tile in a landscape counter space, you collect that counter and can place a small or large landscape (depending on the counter type) on one edge of the board. These landscapes become important in endgame scoring for people you have influenced.

One interesting aspect of the garden tile action is that some of the available tiles are face up. At least two of the four tile stacks have a face up tile at all times, allowing you to select the most advantageous or gamble on a face down tile. The tile stacks are organized by dominant terrain type, so if you really need a water edge, you can draw a face down water tile and hope for the best. The number of face down tiles also increases the number of decoration cards you draw in the other basic action.

That other basic action, which cannot be taken if you place a garden tile and vice versa, is decorating. For a decorate action, you draw decoration cards and select one to place on appropriate terrain – fish in water, trees in greenery, pavilions on rock, etc. You retain the decoration card for a set-collection process that results in coins at the end of the game. For example, a pair of one fish and one bird nets you six coins, while having the most pavilions gets you 12.

In addition to these two actions, there are three other possible actions available. If you have advanced all three of your player board tracks far enough, you can select a person to influence. Each person, ranging from the Emperor to a child, has an end-game scoring condition based on what they are looking at in the garden, and also scores coins based on all of the decorations in their direct line of sight. You begin the game with one person, who will also have an in-game benefit if you retain them off the board. For example, the Hermit gets you a coin every time you advance your rock track. When you influence a new person, you can place either your current off-board person or the new one in one of the designated spaces on the board, oriented however you like. This is where the landscapes come in – many people have preferred landscapes and score at the end of the game based on how many they can see. For example, the Emperor scores five coins for each dragon he can see.

The remaining two actions involve lantern tokens on each player’s board. The four lanterns each have a special ability that can be very powerful when deployed at the right time. Only one lantern can be played per turn. One allows you to play two garden tiles, one to play two decorations, one to move one of your people on the board, and one to search the deck to select a specific person. Each lantern can be used once, but players who have collected enough landscape tokens can spend them to refresh a lantern.

The game ends when either one of the stacks of garden tiles is depleted or there are only three landscape tokens left on the board. (In my experience so far, it’s always the landscape tokens that trigger end game). Players collect coins based on their people and decorations, and the one with the most coins wins.

Gameplay is pretty fast, but there is some potential for analysis paralysis, as trying to make an optimum move can be difficult at times. The decoration actions are extremely important – decorations have been the decisive source of coins in most games I played. While the game is playable with two players, it’s much more fun with three or four. The solo mode requires you to fill the garden with tiles while simultaneously decorating it with randomly selected decorations – it’s very challenging, as befits a solo mode, but can come down to luck of the draw for garden tiles or decorations. It’s important to pay close attention to the items in the rulebook in red text – missing one of them can radically alter the game.

The most impressive aspect of the game is its table presence. Three dimensional pavilions, trees, and bridges fill the garden, miniatures take their positions for optimum viewing, and the landscapes are placed upright at the borders. The overall effect is beautiful.

There are a few gripes with the components, however. The trees and pavilions tend to fall apart unless glued, and the iconography on the character cards is very difficult to parse. Some of the decorations, like the animals and flowers, are simple punch-board counters, and I expect third party add-on meeples or minis to show up to replace them before long.

Overall, however, Tang Garden is a fun, competitive but not cut-throat game playable in 1-2 hours. It’s a great choice for anyone who likes the theme and is looking for a moderately complex game with a lot of different elements.