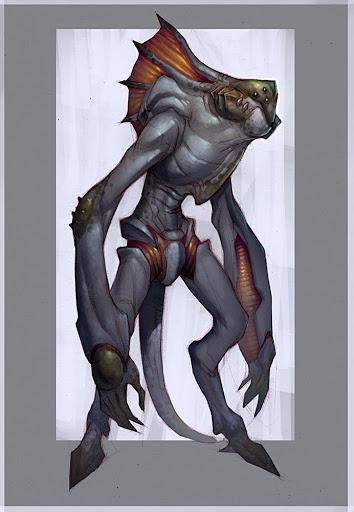 The crew of the Blind Jump continues their exploration of the undersea alien installation. An airlock chamber leads to a large room filled with catwalks over a large pool. Machinery in the room sends jets of water at random around the space, while worker biodrones manage control panels and adjust equipment. Seeing shark fins in the water, Binx says “Oh hell no,” and shuts the airlock door before anyone can enter.

Miaulong proposes sending in her microbug, and Binx reluctantly agrees. The microbug flies over to inspect the control console. Through the bug’s video feed, the crew sees a strange belt-like device on the console, as well as a programming terminal that would require hacking skills to access. Hooey proposes entering the room in “disguise”, wearing the Founder skull the crew discovered earlier. Most are amused by this plan, but Binx is out – she heads back towards the airlock where they entered the complex.

Hooey enters the room and moves towards the consoles as the biodrones start to converge on him. Lefty also enters and Max takes a rifleman’s crouch at the door. Shuhb follows Binx, trying to persuade her to rejoin the group. “Hey, you know, no matter how this shakes out, we’re probably safer together,” he says.

“Great, then let’s both go back to the ship and let the crazy people kill themselves!” Binx retorts.

“I mean, we’ve got Max, and Miaulong’s our pilot. We kind of need them,” he answers. Binx agrees to wait about 20 meters down the corridor and see what happens.

Meanwhile, the advancing biodrones pull out welding torches. Lefty sprays fire from his Founder raygun and drops one of the biodrones. Hooey fires his microwave raygun but misses, and then one of the biodrones hits him with a blast of plasma from his welding torch and he goes down. Another drone swings at Lefty and misses. Miaulong pops the door open, drops a drone with her raygun, then closes the door again. The water jets blast out, catching another drone and knocking it into the shark pool, where it disappears.

The drones counterattack, and one catches Max with a welding torch, seriously burning him. Lefty shoves the drone he’s fighting away from him and makes for the door, where the returning Binx has popped in to spray fire at a cluster of drones, killing one. Despite his wounds, Max shreds another with his needle rifle. The water jets fire again, nearly knocking Hooey into the shark-infested pool and knocking a drone over the rail into the water.

Setting Hooey down, Shuhb re-enters the room, winging one of the three surviving drones with his needle pistol. Lefty shoots another with his raygun, crisping its torso. Max punches a needle through another drone, leaving only one standing, then pivots and shoots the last.

After patching up Hooey with a combination of first aid and their Founder healing device, the crew sends him back in to attempt to hack the control console and turn off the water jets. Hooey’s hacking attempt fails, but the bodies in the water clog the pumps and the water jets fail. The crew explores the rest of the complex and discovers what appears to be a Founder submersible, but is unable to fit it aboard their ship.

With a wounded crewman and an explosion in social media followers, the crew decide to travel to a civilized system for their next stop. The Tlaina system is home to an ancient species of aquatic starfarers, and also one of the coordinates they discovered on their first mission.

Emerging from the wormhole exit node in Tlaina, the Blind Jump is greeted by a pair of enormous monitors – non-jump-capable battleships stationed to prevent any possibility of an attack by smaller jumpships. The system itself has been re-engineered- every stellar body except for the Tlaina homeworld has been reprocessed into material for a vast ringworld orbiting perpendicular to the ecliptic. Miaulong docks the ship on the rim of the ring, and the crew begins to resupply and seeks medical help for Max and Hooey.