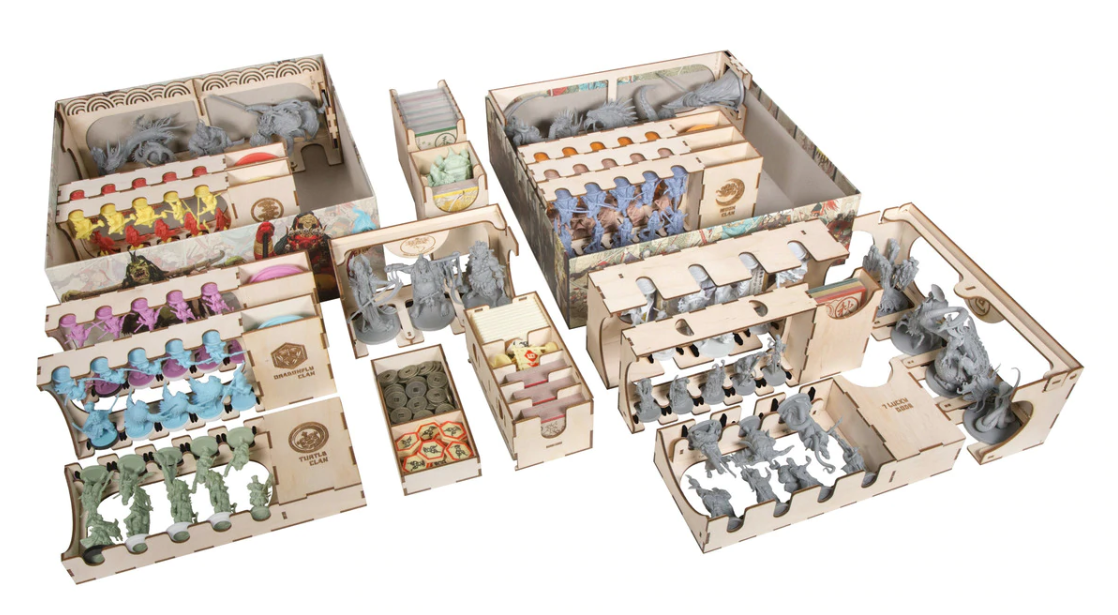 Partly in an effort to speed up setups and partly to save space on my game shelves, I’ve been slowly picking up inserts for my board game collection. The basic idea behind an insert is that it neatly packages all of the game components and, ideally, presents them in a ready-to-play fashion. This can range from a relatively simple insert like Folded Space‘s Viticulture inserts:

…to a very complex set like The Broken Token’s Daimyo Box insert for Rising Sun, with nineteen removable trays and storage for miniatures.

Most inserts are designed to use the original box (or boxes, in some cases), but some companies also provide new boxes or wooden crates for storage instead.

So what do you need to think about when selecting an insert? First of all, figuring out which companies provide an insert for the game you want is paramount. Not every company supports every game, and you may not have more than one option. It’s also important to make sure you’re getting the right insert for your combination of game and expansions. For example, The Broken Token has two organizers for Scythe, one for the core game and one for the expansions, and the expansion one relies on your having the “Legendary Box”, itself an expansion from the publisher. Similarly, I ran afoul of this issue with the Viticulture Essential Edition box from Folded Space; I don’t have the Essential Edition, I have Viticulture (core) plus the Tuscany expansion, which is similar but NOT identical, and required some finagling to get most of the components into the box. One other consideration is box “inflation”. Many inserts result in a slight gap from the bottom of the box to the bottom edge of the cover; if that’s a bother for you, those might be ones to avoid.

Another key question is the base material. Broken Token and Go7Games use laser-cut wooden sheets, while Folded Space uses foamcore sheets. The foamcore is significantly lighter, but less attractive, and I’ve found that the glued joints are sturdier on wood then on foamcore as well. Wood also allows for laser-cut or burned decorations that can make your insert look that much cooler. 3D printed inserts are also an up-and-coming area, but I haven’t had any experience with them as yet. If you don’t have a printer yourself, Etsy has a lot of crafters making 3D printed inserts for sale.

If it’s not obvious from that last paragraph, I’m less of a fan of the Folded Space insert. It gets the job done, but it’s not attractive doing it, and I’ve already had some issues with sturdiness of the insert elements in use. On the other hand, as noted above, you need to see what inserts are available (if any) for your particular game.

OK, so what about Go 7 Gaming vs. Broken Token? In general, the construction and quality of the inserts is very similar, and you can’t really go wrong with either. Go 7 tends to be a bit less expensive, while Broken Token has a slight edge in sturdiness of construction.

I really love my inserts, mostly because they make setup, teardown, and storage of games much easier. If that sounds appealing, check out what inserts are available for your favorite games!