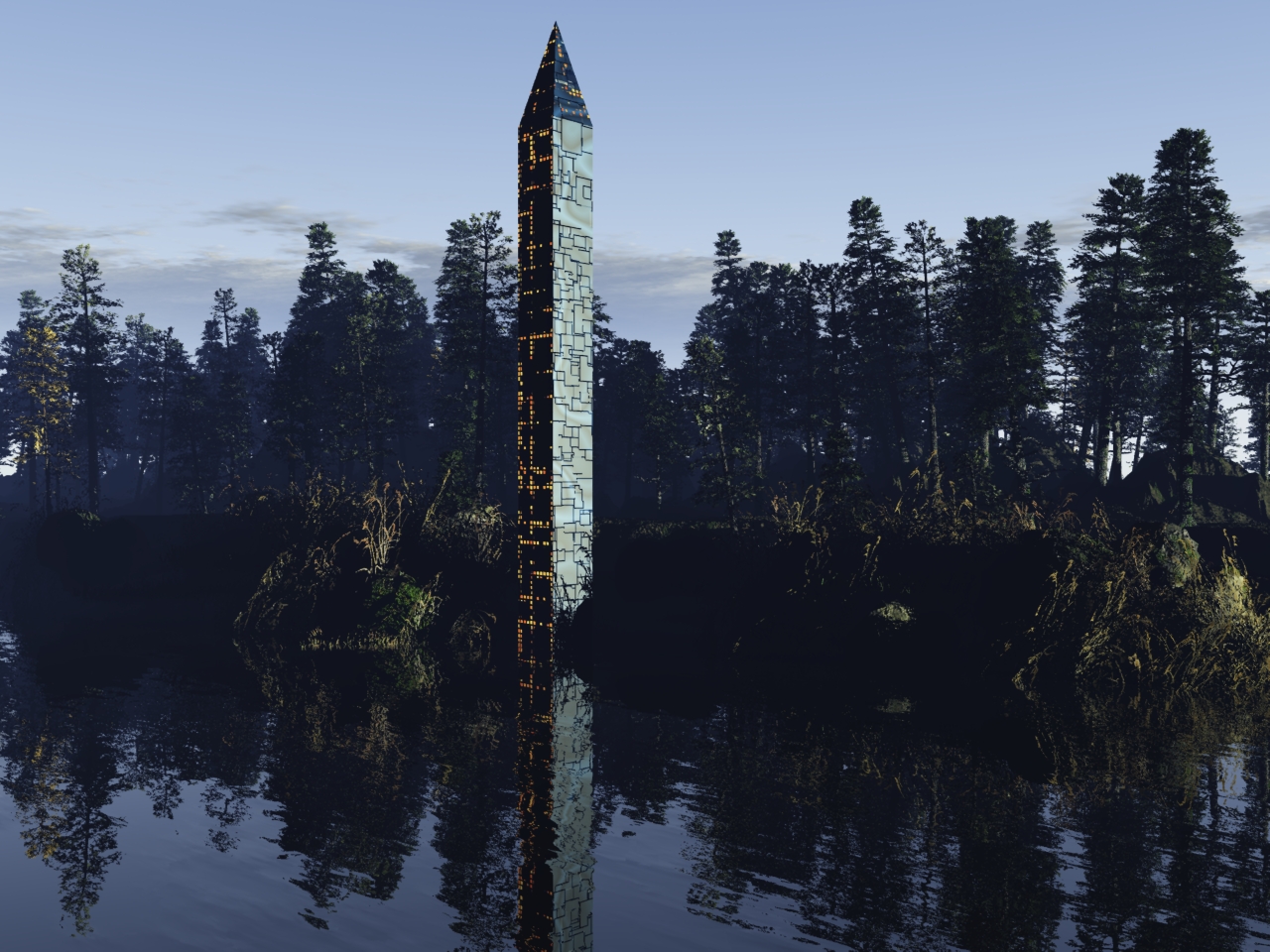 The crew of the Blind Jump has finally left the bug-infested jungle world behind, and after a stop at the Place of Contemplation to recover and resupply, they head for their next blind wormhole exit node. The ship emerges from the wormhole in a yellow star system with ten large gas giants and two small rocky worlds orbiting inside them. The innermost world is a volcanic hellscape with a corrosive atmosphere, but also features a miles-high metal obelisk. The crew land their landing ship near the obelisk and survey the area. After circling the obelisk in the ship, the crew identifies some markings on one side of the obelisk that might provide a possible path of entry. Otherwise, the obelisk appears inert except for a slightly higher temperature than the surrounding rock.

Whooey and Max think that the markings might be a way in, so they head out into the corrosive gases, and experiment with moving the tiled markings until they find a passage into the obelisk. The rest of the crew join them, and they find that a short distance in, the atmosphere shifts to an oxygen mix with only a whiff of the corrosive gases from outside.

The crew enters a large open gallery. The walls are covered in purple-pink pulsating membranes with green phosphorescent veins running through them. Two round rubbery tubes lead upwards into the obelisk. “Ooh, biotechnology!” exclaims Whooey, and immediately begins poking at them, then examines the tubes and finds that they spiral upwards a limited distance.

“Miaulong, send your drone up,” suggests Lefty. Miaulong retrieves the drone from their mule and sends it up one tube. The signal degrades a bit, but after a while the bug emerges in a garden-like space with strange plants from multiple biomes. They recall the drone and send it up the other tube, finding a large oval chamber. At the bottom of the chamber is a pool of brown slime, and three groups of aliens walk a catwalk over the pool. The crew opts for the garden space.

The space itself is quite lovely but very strange, with leaves ranging across all colors of the rainbow. Whooey quickly determines that the plant life came from multiple worlds, and that a few of the larger plants in the room are carnivorous. He charts a path to allow the crew to avoid the carnivorous plants and move further up the obelisk.

Miaulong sends the drone ahead again, but this time he abruptly loses communication. Some sort of appendage appears to have crushed the microbug. Nevertheless, the crew ascends the tube. After a short climb, they encounter rotting corpses of some sort of creature, which animate and attack. “Hello, friends, we’ve come to study how you operate,” pipes up Whooey. Lefty, on the other hand, fires his raygun, scorching one of the corpses. Shuhb also fires, shredding one of the corpses and winging another. Binx fires and drops two more with her needle rifle on full auto. Miaulong fires his newly-acquired ion blaster, singing some of the corpses but without much effect.

The corpses lurch forward and the three in front vomit a sickening brown bile that begins to eat into Max’s armor. In response, Whooey vaporizes one with his welding torch, and Max fires his needle rifle, ripping two more corpses apart. “Man, this is much better than the giant bugs OR the sharks,” says Max.

“I don’t know, those bugs were tasty…” replies Shuhb. Lefty fires his raygun again, adding his microwave raygun as well, but neither seems to affect the creature. Miaulong fires the ion blaster again, but the corpses continue to advance.

Whooey closes in with his torch, yelling, “Hey, seriously, can I study you instead of killing you?” He swings but misses the corpse. Max fires his needle rifle again, and the last two corpses go down.

Further up the corridor, the crew encounters a six-lobed chamber that seems to be pumping the green phosphorescent fluid through huge veins. The pulsating walls are terrifying to behold, and the moving floor and walls make traversing the chamber difficult. Binx scales to one of the higher exits by means of free climbing, taking full advantage of her cybernetic legs. Lefty employs his grasp of three-dimensional space to make his way up. Shuhb asks Binx to toss down her smartrope, which she does, but her aim is off making it more difficult to use, but he slowly makes his way up, encouraged by Binx and Lefty. “Do left-right-left-A-kick!” yells Lefty. Shuhb whips out an adrenaline injector and stabs the heart, hurling him upwards, but he falls back to the floor.

Max extends his cyberblades and, wrapping the rope around himself, stabs into the wall to create handholds, making his way to the top but with a frightening dangle at the end. “When all else fails, use violence,” says Max with satisfaction. Whooey studies the heart, assessing the structures around him, then makes his way up using the smartrope to help. Shuhb makes another attempt, using the adrenaline injector and clinging to the smartrope, as Lefty fires his raygun to carve footholds into the wall of the heart, but he falls again before Miaulong scrambles up and hauls him up with the ribbon climber. With everyone clear of the heart chamber, the crew ascend further into the obelisk…