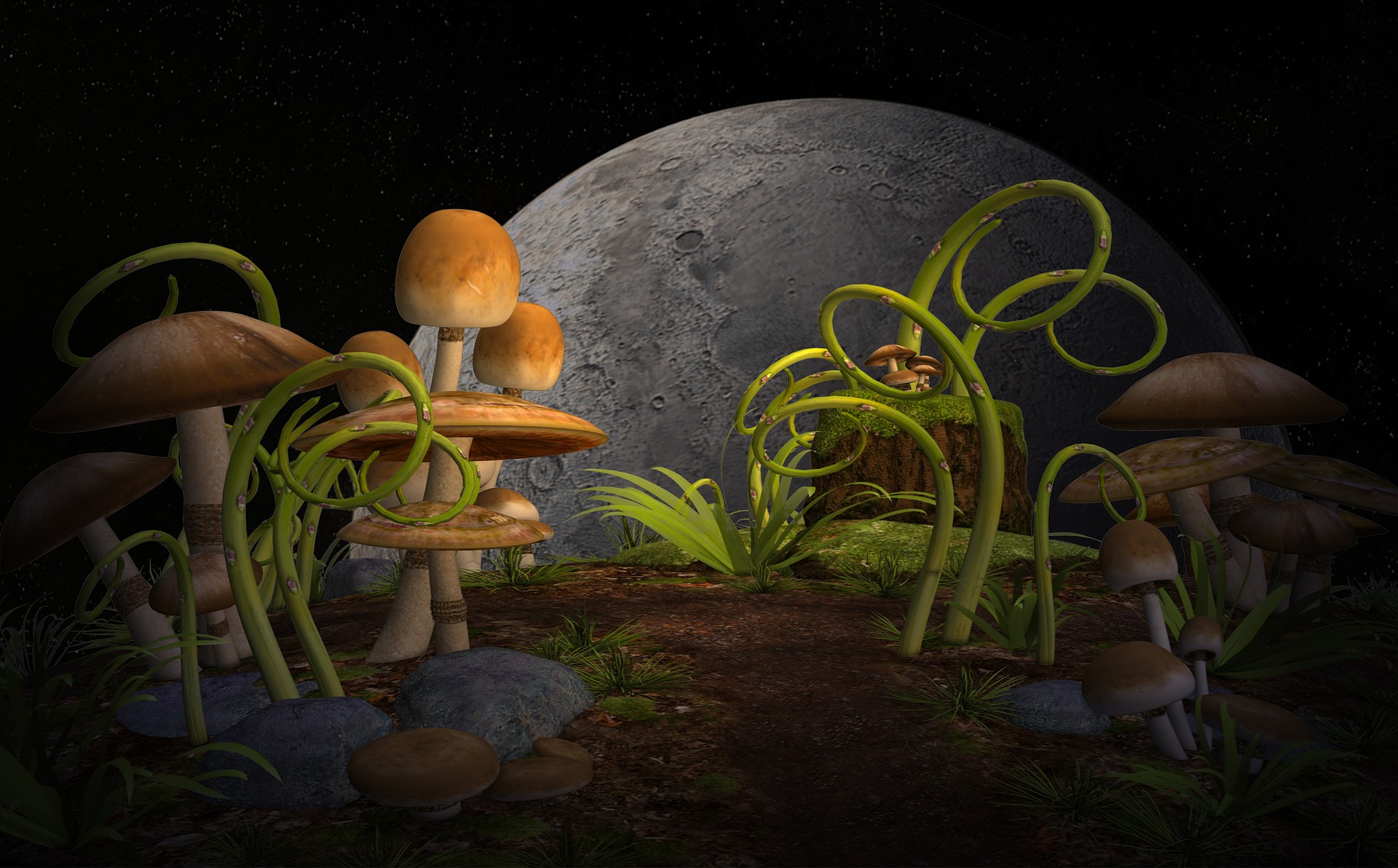 The crew of the Blind Jump, having settled their argument about smart rope, begins to cross the bile swamp in the large alien obelisk. Whooey enters the pool and carefully probes ahead with Binx’s smartrope. As he moves across, he sees ripples of movement in the opaque fluid. He quickly retreats, and the crew considers their options. The crew opens fire with their microwave rayguns, hoping to scare off any creatures, but mostly filling the room with steam. Miaulong fires his ion blaster as well, sending gouts of brown fluid into the air.

Whooey cautiously enters the pool again, and, about partway across, sees movement just before two worm-like creatures leap out of the fluid and attack. The creatures wrap their long rubbery bodies around Whooey, attempting to crush him. Binx sprays the bile with her needle rifle, but realizes that she just expended all of her ammunition. The worms constrict around Whooey, trying to crush him, but Whooey fights back, throwing off one of the worms. Seeing a wake, Max fires at a worm, punching a needle into its body and killing it. Miaulong fires her raygun, striking three of the creatures and killing them instantly. Lefty kills another with his pulse raygun, then fires his microwave raygun directly at Whooey, hitting him and the worm entangling him. The worm collapses into the bile as Whooey screams and runs for the chamber entrance. Pulling himself together, Whooey swings his welding torch at the worm, incinerating it and caramelizing much of the bile in the vicinity. Binx makes a gagging sound.

Whooey continues across and connects the ribbon climber so that most of the group can cross without wading through the pool. As Lefty walks across with the ribbon climber, henotices a metallic gleam in the body of one of the worms, and pulls a Founder device from the creature’s gullet. Whooey and Binx examine the device, but are unsure of its meaning.

The crew continues to climb, when a valve suddenly opens under Miaulong, sealing above him as he falls. Whooey starts to cut through the valve, but Miaulong radios that he is OK, just sliding somewhere. He lands in the bile pool and asks the crew to stay put until he reaches them. Reunited, the crew continues to a large chamber filled with green mist. Scattered around the space, tall neon blue columns pulse from the floor to the ceiling. Whooey rushes over to study one of the columns, but pauses when he sees some of the corpse-like creatures ahead. Strangely, the creatures are not moving. “How come everything always has to interrupt my science?” mutters Whooey.

The rest of the crew readies their weapons and enters the room as Whooey sends an image tagging the location of the creatures, then walks over to assess the columns. He decides they have something to do with life support for the obelisk, but is otherwise mystified. The creatures remain unmoving as the crew cautiously moves through the room. Whooey turns his scanset onto the creatures from a safe distance, but doesn’t see anything obvious. The crew traverses the room without any ill effects, and makes their way to a new space that seems to be filled with webbing ladders and slimy chutes. Looking it over, the crew turns around and takes another route. They ascend to a large space with a relatively low ceiling.

In this new room, a huge number of two-meter tentacles hang from the ceiling and extend from the walls and floor, gently waving. Whooey scans them and determines that they seem to be alive but have no obvious sense organs. Binx extends her smartrope into the room, and one of the tentacles begins stroking it. She retracts it and Whooey runs an assessment on it with his mobile lab, determining that it had no real effect on the rope, not even residual cells. The crew decides to risk the harrowing experience and walks through the chamber. Miaulong panics and runs through the room screaming; Binx freezes up and has to be dragged through.

At last, the crew reaches the top of the obelisk. The walls are translucent from the inside, shining light on a garden with colored gravel paths and four creatures. One is a hairy, tentacled pentapod, another is a three-legged ostrich-like creature, a third is a tall, spindly biped, and the fourth is a centaur-like creature but with an ant-body instead of a human torso. Each path has stripes, and other patterns are in the center of the garden in a large circular space. Whooey begins to examine the creature, and notices that the gravel in the center of the garden provides a coordinate fragment. His studies also show that the four creatures are all from different genetic heritages and therefore from different worlds. Working with the creatures, the crew manage to cause the ostrich-like creature to lay an egg. Whooey determines that the compounds in the yolk of the egg contain a powerful anti-toxin. “That sounds like the best hangover cure ever,” says Shuhb.

The crew returns to their ship and considers their next move. They decide to move on to the next system and make another blind jump. They locate a system with three gas giants and several inner rocky worlds, one of which harbors life and has a single location that radiates electromagnetic noise. The crew detaches their lander and begins to descend to investigate…