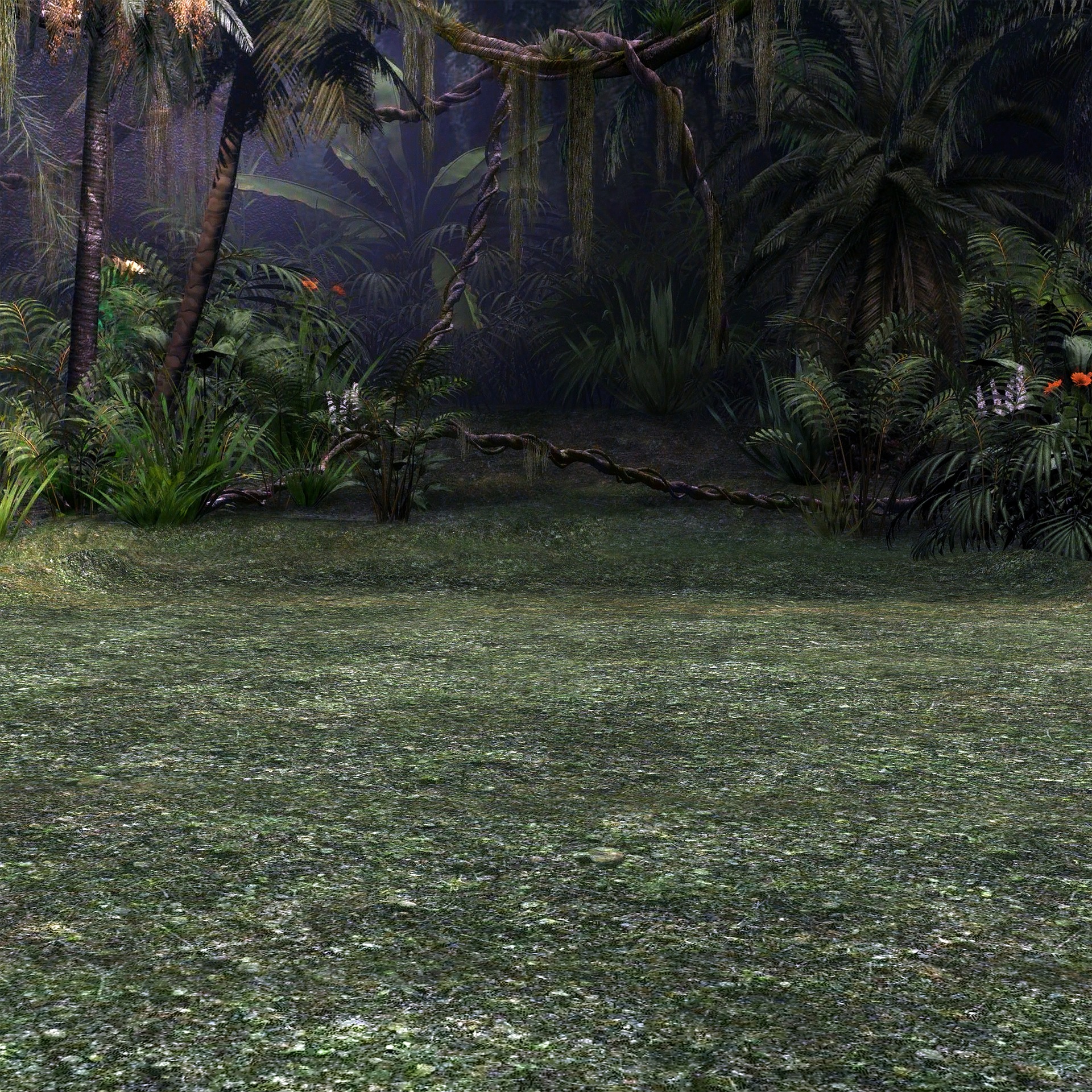 The Blind Jump crew have discovered a Founder installation on a world full of plant and animal life. The installation is in the form of a pyramid, and as the crew observes from orbit, is surrounded by a settlement inhabited by indigenous sentient life. The local life forms are primitive, at roughly the Iron Age level of technology, and appear to be mammal-like bipeds. The crew detaches their lander and puts down about 30 kilometers from the settlement to avoid being seen.

The crew decides on a stealthy approach, walking from the lander to the settlement to avoid startling the locals and to assess their approachability. Unfortunately, Lefty stumbles into a tangle of brambles, making a huge ruckus and attracting the attention of four of the indigenous life forms. The locals are vaguely humanoid, and, on seeing Lefty, start talking animatedly among themselves. They wear surprisingly sophisticated burnished metal armor, inconsistent with much of the technology the crew observed from orbit. After a few moments of speech among themselves, the locals disappear into the brush.

The crew regroups and proceeds with setting up a base camp. After a night spent at the camp, Max, Whooey, Binx, and Lefty head towards the village to reconnoiter. About halfway there, the four encounter a large force of indigenous people, many of whom are heavily armed and armored. “Everyone with arms, raise them,” suggests Binx.

One local with a plumed helmet gestures for the others to stop, then raises his own arms. He touches the breastplate of his armor and moves towards Whooey with his left hand extended. Whooey extends a tentacle in return, and the plumed being touches Whooey on his chest and begins to speak. Binx manages to convey that they do not understand the speech, and the plumed leader gestures to his men and they bring a large ingot of the same strange metal they are wearing as armor. They hand the ingot to Whooey, then the leader points to the crew and then to the sky.

Whooey gestures to the crew and then points to the sky. The leader rotates his head in a circle, then forcefully points to the sky again, then the locals ground their spears and the leader clasps his hands together, and then they all turn around and return to the settlement.

Baffled, the crew tries to figure out what the indigenous people meant. Some thing they are trying to figure out if the crew came from the sky, others that the locals want the crew to leave. Whooey analyzes the metal and determines that it is a phenomenally strong superalloy of cobalt, nickel, and chromium, meaning that the locals’ armor would be much stronger than expected for a spears-and-arrows military.

Whooey devotes the remainder of the day to program a neural net to provide language translation, but more data is needed to learn the language. Binx and Whooey sneak to the village to deploy a drone to record the local language. Over the next few days, the drone records enough information to create a real-time translation of the language, and discover that the locals refer to themselves as Churaks.

The crew moves in closer to the village to establish direct communications. Whooey, Binx, and Shuhb approach the village, and Lefty heads back to the ship to try to locate cobalt deposits to make more of the alloy. The Churak with the plumed armor approaches, looking frustrated, and then points at the trio and then up at the sky. Whooey says, “Greetings, good sir. We just wanted to make sure what you wanted us to do with the ingot.”

The Churak leader replies, “Ah, I see you sky people have also learned our language. I thought my intentions were obvious. Yes, I wanted you to take it and go, and not stay and cause trouble.”

“Our intentions were not to cause trouble,” says Binx.

“Oh? Then how are you different from the last sky people?”

“There were others here before us?”

The Churak answers, “Yes, and they caused several deaths and considerable disruption to our community. Your kind are not welcome here.” She points to a spot over the gate to the village, where a skull hangs. Whooey can see that the skull is not from a Churak.

Binx says, “We sky people, as you call us, come from many disparate cultures. We are not all aligned with each other, and we are very sorry that the others who came were disruptive. We do not have the same intentions.”

“We shall see. What is your purpose here?”

“We’ve been traveling across the sky for a long time now, looking for new discoveries to benefit our community. Our only intention is to observe and explore, not to plunder or harm anyone we encounter.”

Over the comms, Max says, “We should totally be trolling these guys.”

“I don’t know why we’re not pranking them either. Is this where we tell them we’re here to ransack this pyramid?” asks Shuhb.

“What possible value could beings with your abilities find in our small village?” asks the leader.

“It’s about the pyramid,” answers Binx.

“Then you are here for the same reason,” yells the leader.

“We don’t intend to plunder, just to explore.”

“The pyramid is sacred to us as the source of our war-metal. It is my obligation to the chief of chiefs to ensure no one enters. I was willing to bribe you to go away, but I absolutely cannot allow you access to the pyramid.”

“Would it help if one of your people accompanied us?”

“We do not enter the sacred pyramid! It is the bounty of the gods that sends the war metal from time to time, and we collect it and forge it into our arms, which we then send to the chief of chiefs.”

Whooey interjects. “We are just looking for a specific piece of knowledge that the sacred pyramid contains.”

“You wish to steal the knowledge of the gods? What manner of creatures are you?”

Binx pulls out her hand terminal and pulls up a coordinate fragment. “All we are looking for is something like this.”

“I have seen symbols like this on the outside of the pyramid. The entrance is covered with them. This is the language of the gods.”

Whooey says, “This is how we worship the gods, by copying their symbols and showing them to others so that they may know about the gods.”

“There is wisdom to be learned from the gods, but it is my sworn duty to protect the pyramid from invaders, whether they come from neighboring tribes or from the sky.”

“Perhaps some of your tribe could find symbols like this and copy them for us.”

“Perhaps, if you could provide trade goods to equal the value of the parchment.”

The crew considers their options. Binx suggests creating medicine for the Churaks, and Shuhb agrees. “We could treat your sick,” suggests Whooey.

“We have no sickness here, but there is disease in the cities to the north.”

“Would you allow us to help with this illness?” asks Binx.

“Such a nostrum would be of sufficient value for us to trade for parchment copies of the writing of the gods.”

“You know the symbols they jot down aren’t going to be the ones you need, right?” asks Shuhb on the radio.

“The point is to ingratiate ourselves,” growls Binx.

“Tell them I need to look at the flesh,” says Shuhb.

“That’s creepy. Ahem.” Switching to Churak, Binx says, “Our medic needs to examine one of your people to learn about your nature.”

“Very well, your physic may examine one of us.”

Shuhb approaches and the leader sends a trooper forward to meet him. Shuhb pulls out his portable lab and medkit and goes to work. However, he is confused by the readings. He decides that he has a complete understanding of the physiology, and boasts, “I can come up with a medicine for these people that will double their lifespan!”

“Really? That kind of life extension would change… everything! Make this medicine for us and we will give it to the village.”

Shuhb transmits the formula to Lefty back at the lander, and the omniprinter begins to print out the medicine Shuhb designed, a neon green fluid. Two days later, the groups meet again to exchange the medicine for the parchments.

The leader says, “You have proven yourselves to be sky-people of honor. We invite you to a feast in our village, if you are willing to leave your weapons behind.” Shuhb, Binx, and Whooey agree to join the villagers, who drink Shuhb’s potion as they enjoy local foods. After an hour or so, however, it becomes clear that everyone in the village has been afflicted with violent nausea… including the guards at the entrance to the pyramid.

“I’m sure it’s just a side effect, but I’m going to check my work… oh. There was leftover DNA from the last planet in my medkit. I just poisoned the whole village. But don’t worry, it’s not lethal, and we probably have a day or two while they’re going to be incapacitated. I say we go for it.”

“I say you stay here and FIX IT!” says Binx.

“Well, the locals are infected with that disease from up north as well, so I can treat that along with putting together an anti-nausea drug. But maybe Whooey, Lefty, Max, and Miaolong can go in the pyramid while I work.” The crew agrees, and the foursome enters the pyramid while Shuhb goes to work.